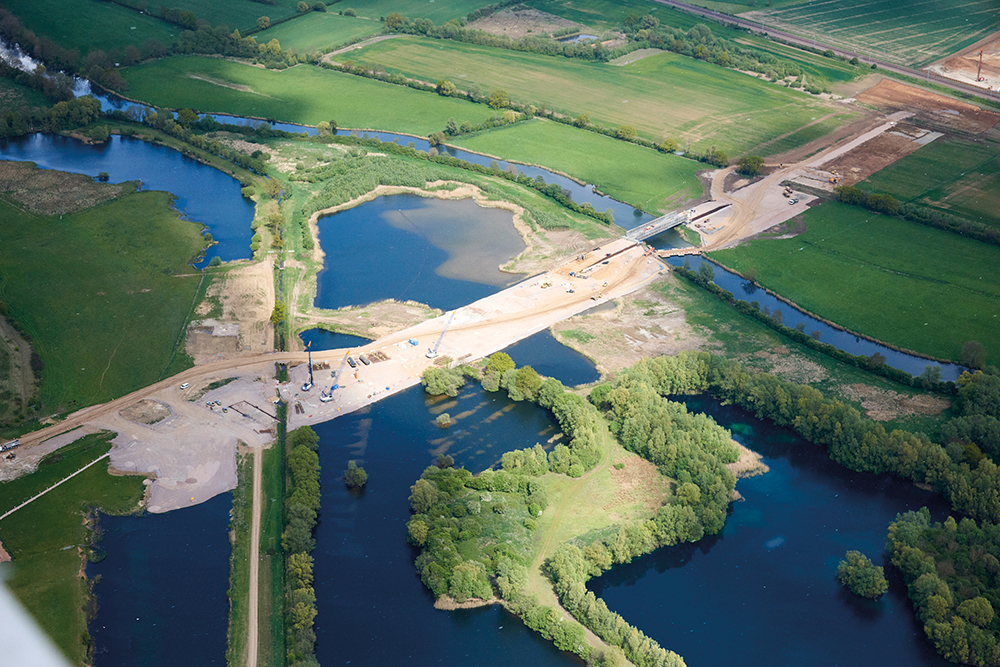 Eighteen months ago, you would have been standing in the middle of the River Great Ouse floodplain, a few miles south of Huntingdon.

Fast forward to the present day and Highways England have just unveiled an incredible feat of construction as the newly built half-mile long River Great Ouse Viaduct is finished.

The viaduct is the largest of the 34 new bridges that will be part of the £1.5 billion Cambridge to Huntingdon scheme that is transforming one of the East of England’s most vital roads. The A14 provides a crucial transport corridor between the West Midlands and East Anglia, and has local, regional, national and international significance.

Being Britain’s biggest road project currently under construction, the new A14 will open to drivers by December 2020. The new three-lane road between Cambridge and Huntingdon is expected to be a motorway and the existing A14 and A1 will also see a wealth of improvements to improve driver experience.

With construction on time and budget, David Bray, the Project Director, is looking forward to the opening: “Our amazing team has been working incredibly hard to deliver this upgraded A14, and most days we have up to 2,700 staff working across more than 20 miles to build the new roads and bridges that are needed. This is the biggest road building project currently taking place in the country, yet drivers can only see around a quarter of it from the existing road at present.

“Working on this epic project has been remarkable so far: from seeing the new road emerge as we moved earth into place for its foundations, to the wide array of bridges and structures being built, the fantastic discoveries of our archaeological team and the industry-leading work our environmental team is carrying out.”

This isn’t the only major road scheme taking place in the eastern region helping to unlock a great deal of local and national economic benefits, as well as cutting congestion and journey times for all drivers.

Late last year, Highways England revealed updated plans for the Lower Thames Crossing between Kent and Essex – which will be Britain’s biggest road project since the M25 was constructed 30 years ago. The 14.5-mile route will nearly double road capacity across the River Thames and almost halve northbound journey times at the Dartford Crossing when it opens in 2027.

The project will create a new, three-lane road connecting the M2 near Rochester and the M25 in Essex between North and South Ockenden. It will also include a 2.5-mile-long tunnel under the Thames between Gravesend and Tilbury – the longest road tunnel in the UK – and, at 50 feet wide, the third largest bored tunnel in the world.

A third major scheme that is in the works is the upgrade of the A428, which will create a new 10-mile stretch of dual carriageway between the Black Cat roundabout on the A1 and the Caxton Gibbet junction of the A428, reshaping one of the region’s most congested roads and junctions.

In a project that will improve a key east-west road link, journeys on the A1, the A421 and the A428 will see a new three tier junction at the Black Cat roundabout, allowing drivers to pass through the junction uninterrupted, while keeping the roundabout clear for vehicles making turns between roads.

With the preferred route announced in February this year, the public will get a chance to have their say on the plans when a public consultation launches in the summer.

Highways England project lead, Lee Galloway, is confident the new A428 will complement other road upgrades in the region delivering shorter journey times: “This major new dual carriageway between St Neots and Cambridge and upgrade for the Black Cat junction will mean quicker and safer journeys for people and will also boost the economy and unlock future housing.

“As well as significant improvements locally, the project will be a vital component in improving the regional and national road network. The improvements will complement our £1.5bn A14 upgrade and form part of a wider transformation of road links between Cambridge, Milton Keynes and Oxford.”

Despite this, the east-west transport connection between these areas is notoriously poor with issues such as congestion, slow speeds, poor journey time reliability and no single route to travel from end to end. By 2030, Highways England hopes to deliver a fast, high-quality road link between Oxford, Milton Keynes and Cambridge filling in a missing 30-mile gap in the network.

As well as the major projects, Highways England also has a programme of work delivering renewals, improvements and routine maintenance to the existing roads in the region. This year, more than £60 million will be spent on enhancing roads in the East of England. This will include work such as resurfacing roads and bridge joint repairs, the creation of cycle lanes, and of course, litter picking and pothole repairs.

Safety is at the heart of everything Highways England does, and the company has the goal of ensuring that everyone gets home safe and well. While working to deliver a more dependable, durable and most importantly safe road network, Highways England asks drivers to show extra respect to its traffic officers and contractors working on the upgrades as they approach and pass through any roadworks.