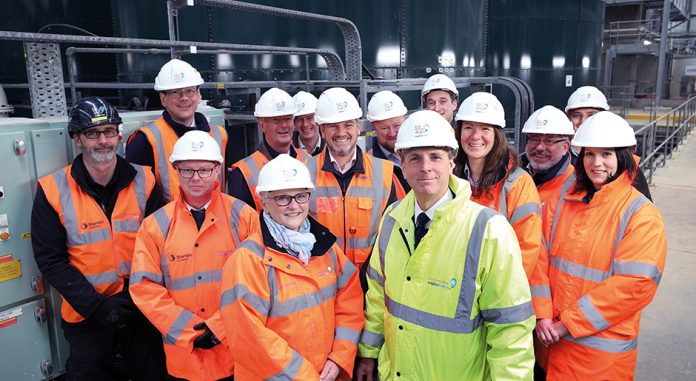 In this issue, Peter Simpson, Chief Executive Officer of Anglian Water, reveals how the company is tackling the challenges ahead, affirms their public interest commitment and pays tribute to his team.

Peter has been Chief Executive Officer of Anglian Water Group since October 2013, previously before that he was Managing Director of Anglian Water from January 2010 and Chief Operating Officer from 2004. He was Chairman of Water UK from April 2012 to October 2013, and is a Past President of the Institute of Water. Peter is a member of Cambridge University’s ‘Programme for Sustainability Leadership’ Climate Change Leaders Group. This influences at a national, EU and global level to reduce carbon emissions, and to champion resource efficiency in water, energy and other natural resources.

Also working with Business in the Community (BITC), Peter chairs the Water Task Force and is on the Place Leadership Team led by Steve Rowe at M&S. He also chairs their Regional Advisory Board for the East of England.

“Anglian Water is geographically the largest water company in England and Wales. We employ 5,000 people and supply water and water recycling services to more than six million customers across the region we serve.”

“Of the many and various challenges we face, the two most acute are a changing climate and a growing population. Our region is not only one of the fastest growing in the country, it’s one of the driest, receiving on average a third less rainfall than other parts of the UK.

“This becomes very real when we encounter the extremes of weather we’ve seen recently, such as the Beast from the East, followed by one of the driest summers on record. It’s vital that we develop the resilience to be ready for a future where these extremes become more common.

“That’s why we’re investing to develop more resilient infrastructure, and committing to things like a further 22% reduction in leakage, despite already being the best in the industry. We’re also planning a comprehensive Smart Metering programme that will really help customers understand how much they use, and make savings.

“Overall, our business plan for the next five years outlines a planned investment of around £6.5billion.

“I’m immensely proud of our achievements, and over the last few years we’ve had some standout moments. In 2017 we were made Business in the Community’s ‘Responsible Business of the Year’. Hot on the heels of that we were crowned Utility of the Year in 2018, before becoming Water Company of the Year earlier in 2019. These awards are a testament to the ongoing hard work of our staff, partners and suppliers.

“It’s particularly pleasing to attract plaudits that reflect what it’s like to work here. For instance, being named Glassdoor’s Best Place to work for 2019 is especially significant because it’s based on reviews left by our own employees.

“It’s definitely not all about awards though. I still take immense pride from the fundamental role we play, day in day out, helping our region grow and our environment flourish. We never lose sight of that, as it’s the most important reason we’re here.”

“Nothing we do would be possible without our team. I’m very grateful that I have a role where I can work with and develop people and teams in the pursuit of doing something meaningful, and where I can see the impact of what we’re doing.”

“I believe it’s so important to create an open culture in any business, where people are allowed to be the experts at what they do and they’re given the freedom to do what’s right for our customers. Our industry moves at a fast pace.

“We’re always looking for people with new ideas and transferable skills, who aren’t afraid to take on a challenge. And there’s always the opportunity for our staff to improve, develop their skills and try new things.”

“Our approach to working with our partners has developed something of a reputation for its ability to deliver great results. It’s an approach to the creation of what we call ‘alliances’, bringing together teams from multiple suppliers to deliver programmes of work, that drives innovation and value, moving us away from the traditional project-by-project client and supplier relationships found elsewhere.

“Best of all, these partnerships are long-term and enduring. In 2015, we committed to 15-year contracts with these businesses, and our alliancing model has been upheld across the industry as an exemplar way of working. Put simply, if we succeed, they succeed.”

“Innovation is crucial, and is something we’ve embraced with open arms. Frankly, some of the challenges we face are so substantial that if we’re not innovative, we don’t stand a chance of taking them on.

“A great example of this would be our Shop Window project in Newmarket – it’s our innovation hot house, offering a real-world test-bed that allows us to trial the latest technology, systems and processes before rolling them out across the business. Crucially, there is clear path to adoption for successful initiatives.

“So far, 114 partners have already delivered 110 projects within the Shop Window, and we’re always looking for more people to join us.”

“Given that energy is one of our biggest costs, and climate change one our most acute threats, it’s natural that we would look to develop renewables and reduce our carbon footprint wherever we can. We set ourselves industry leading carbon targets as far back as 2010, and earlier this year we championed an industry-wide agreement that will see all water companies target net zero carbon by 2030, 20 years ahead of the government’s target of 2050.

“Specifically on renewables, we turn sewage into biogas and ultimately into electricity which we use to power our own sites and give back to the national grid – literally generating power from poo. We’re getting close to 25% of the energy we use coming from renewable sources, like bio-gas, wind and solar, and we’ve tripled the amount of renewable energy we produce in the last five years.”

“The bar is set appropriately high for companies like ours – we provide an essential public service, and because of the way the industry is structured here, customers cannot choose their supplier. For that reason alone, we need to make doubly sure we are working in customers’ interests, and show that we are committed to continuing in that way.

“That’s why, in May this year, we led a programme of work that resulted in all water companies signing up to a Public Interest Commitment that reinforce our commitment to the communities we serve. It will see us tackle things like affordability, social exclusion, employment and environmental improvement – all things that go way beyond the provision of clean, fresh drinking water.

“One of the most exciting pieces of work we’re engaged in at the moment is translating that national set of commitments into a social contract that resonates with our customers here in the East. We’ve done great stuff already in towns like Wisbech, and through our commitment to rid the region of problem plastics, but there’s so much more to do and I’m excited to see where it will take us.”